Shia LaBeouf, a standout amongst the most exciting youthful creatives of our time, has been doing his thing with these livestream art performances, yet his most recent may be his most noteworthy. Commencing at the Museum of the Moving Image in New York is HE WILL NOT DIVIDE US, a four-year plan that propelled on the day Donald Trump gets to be Head Cheeto and president of the USA.

HE WILL NOT DIVIDE US comprises of a divider on the outside of the museum with the words HE WILL NOT DIVIDE US and a camera that will be livestreaming for the term of Trump’s administration. People are requested to get on the stream and say the expression “he won’t separate us” as much or as little as they want.

“Thusly, the mantra “HE WILL NOT DIVIDE US” goes about as a show of resistance or insistence, restriction or good faith, guided by the soul of every individual member and the group,” peruses the official site. 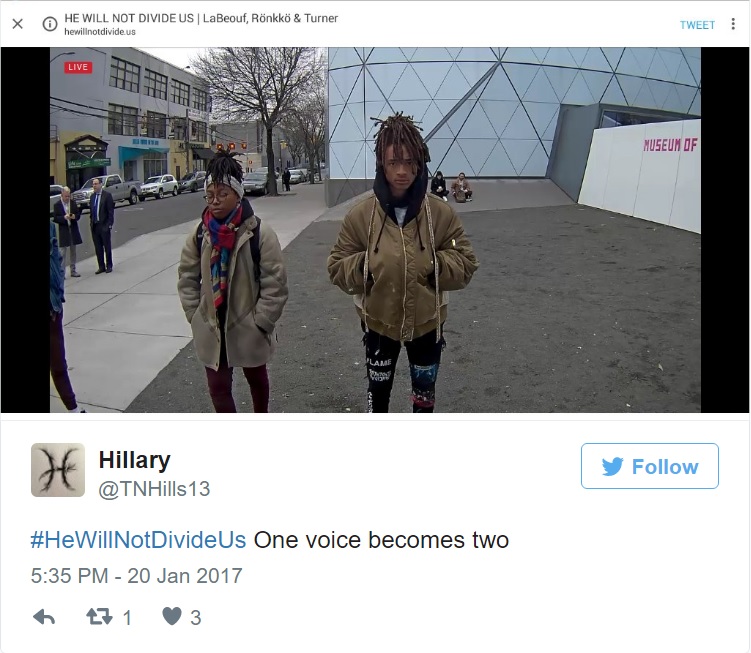 Now eve if you think devoting four years to this is somewhat insane, you need to regard Shia taking his set up brand and use it for a cause that is greater than him. With such a large number of out there feeling like January 20, 2017 is the darkest of days, there are beams of trust, and things like these can truly help get a message out. On the other hand, in any event, let you realize that in the event that you aren’t here for Trump, you are not the only one.