This past March, Ed Sheeran released a beautiful new love song, “Perfect”, on his most recent album, “Divide”. The album was later assigned for a Grammy as Best Pop Album, and only a month ago Ed re-released “Perfect” as a duet remix with Beyoncé.

Following on the foot of that release, Ed just dropped another cooperation, this one including none other than Italian tenor Andrea Bocelli. 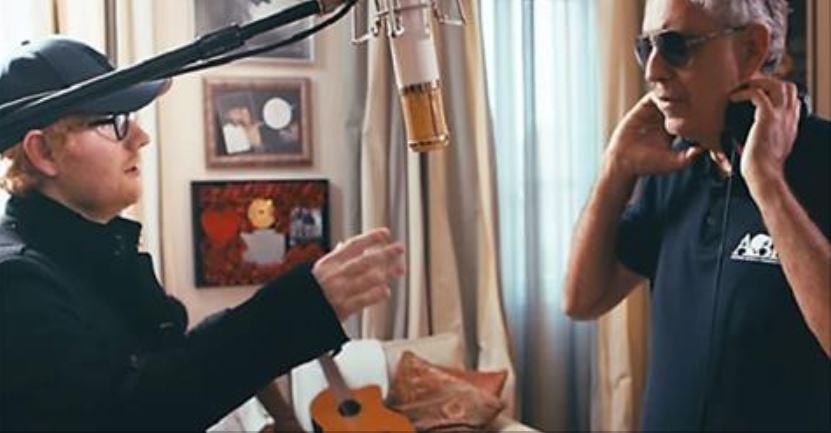 The video of their coordinated effort was an instant success on YouTube, piling on almost 2 million views after several hours of its release.

The video has a warm and cozy feel, with film of the two men recording the two part harmony at Andrea’s home in Tuscany, Italy. The duet was organized by Ed’s brother, Matthew, who also works in the music business as a classical composer.

“Symphonic form of ‘Perfect’ with the stunning Andrea Bocelli comes out Friday,” Ed tweeted recently, making people wondered how the new duet will sound. “Organized and created by my super talented brother Matt, little present for all of you before Christmas.”

The artists alternate lead vocals, Ed’s in English and Andrea’s in Italian, all through the vast majority of the song. In any case, in the last stanza, Ed advances to Italian and the two powerhouse voices combine for an amazing passionate and piercing finale.

Listen to this lovely two part harmony in the video below, and make sure to share to spread more happiness!